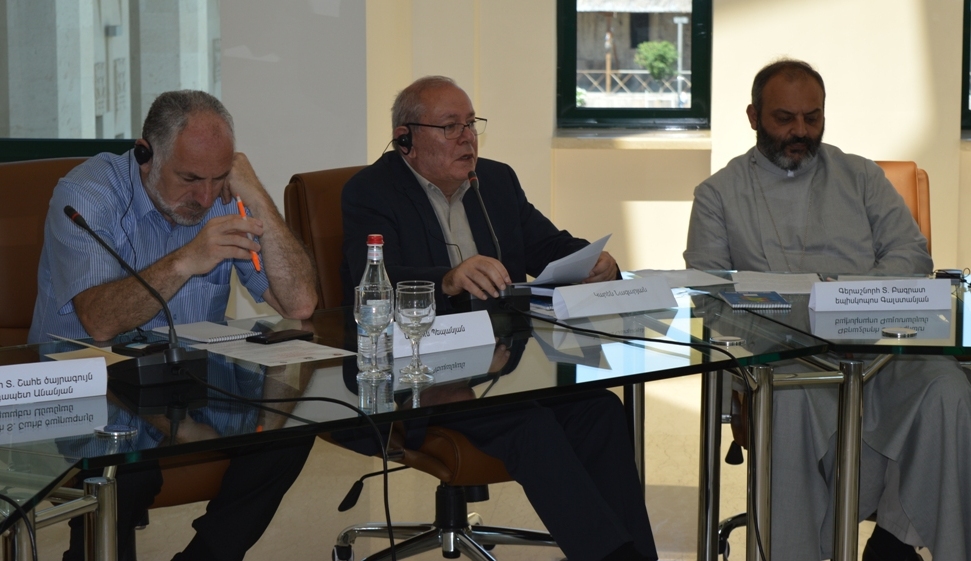 On June 28, an inter-religious Armenian-Iranian discussion on Religion and the Environment, was held in the Vatche and Tamar Manookian Library of the Mother See. The event was organized by the World Council of Churches Armenia Round Table Foundation; in cooperation with the Ecumenical Relations Department of the Mother See of Holy Etchmiadzin, and the Cultural Center of the Embassy of the Islamic Republic of Iran in Armenia.

During the meeting His Eminence Archbishop Nathan Hovhannisyan, Director of the External Relations and Protocol Department of the Mother See; Dr. Karen Nazaryan, Executive Director of Round Table Foundation; and Cultural attaché of the Embassy of the Islamic Republic of Iran in Armenia Mr. Majid Meshki, made opening remarks.

In his remarks Archbishop Nathan conveyed to the participants, the appreciation and best wishes of His Holiness Karekin II, Supreme Patriarch and Catholicos of All Armenians; and expressed gratitude to the organizers of the Armenian-Iranian meeting.

His Eminence stressed the importance of such discussions aimed to promote the development of environmental culture in the region, and the raising of existing problems in the field. Archbishop Nathan stated that the abuse and exploitation of nature by humans and the consequences of it do not recognize borders, which causes anxiety in the region, including in Armenia. His Eminence particularly stressed and confirmed the fact that all religions require their followers to preserve nature as God's creation.

In his remarks, Mr. Meshki noted that the meeting was an important step in the Armenian-Iranian inter-religious dialogue, and expressed hope that such discussions on common concerns will be held regularly and will form a positive tradition of dialogue.

Ms. Nelly Hovhannisyan, candidate of science and education and Head of the Department of Ecology and Nature Protection of Yerevan State University presented a paper on “Interaction and Mutual Understanding of Human and Nature in Time”; and Dr. Mohammad Hossein Imani Khoshkhu, Rector of Tehran University of Science and Culture and Secretary of the Committee of “Culture, Art and Architecture” of the Supreme Council of Culture; presented a paper on “Religious tourism, humanity and nature”; and held a discussion on the forum theme.

During the second session of the forum, reports were presented by Dr. Ayat Peyman, Secretary of the Supreme Council of Iranian Religious Affairs (“Tourism, morality, peace and friendship”) and His Grace Bishop Bagrat Galstanyan, Director of the Conceptual Affairs Department of Mother See and Primate of the Diocese of Tavoush (“In harmony with God’s creation”).

They also answered the questions of the participants. At the conclusion of the meeting a summary was made of the topics presented.