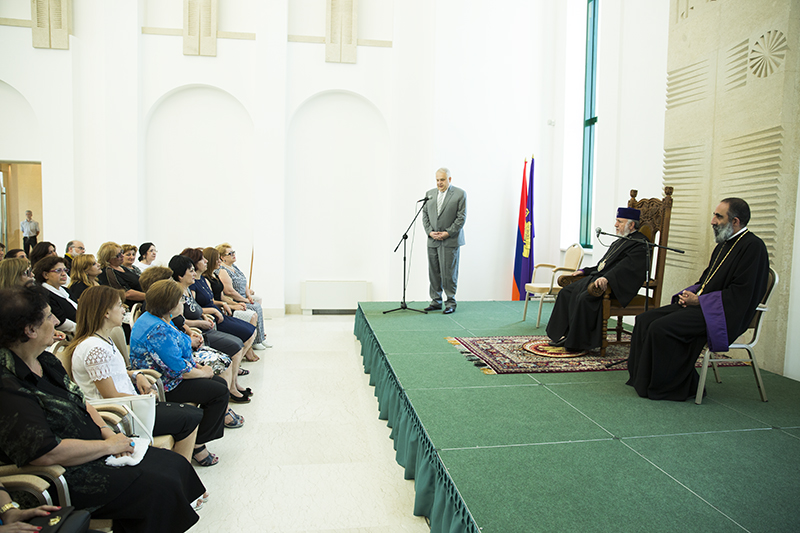 Catholicos of All Armenians Meets With Armenian Teachers from Diaspora

On July 23, in the Mother See of Holy Etchmiadzin, His Holiness Karekin II, Supreme Patriarch and Catholicos of All Armenians; received Armenian teachers from the Diaspora. The teachers are participating in the Teachers' Training Program, sponsored by the Republic of Armenia Ministry of Education and Science. They were accompanied by Prof. Rouben Mizrakhanyan, rector of Khachatur Abovian Armenian State Pedagogical University.

During the meeting, Professor Mizrakhanyan presented to His Holiness the teachers participating in the program, who hailed from 16 countries. In his remarks, he noted that that the training of teachers from the Diaspora, who work in daily and Sunday education institutions, was being held for the 18th time. This year, the Khachatur Abovian Armenian State Pedagogical University is facilitating the training. The rector also noted the attention given by the Mother See of Holy Etchmiadzin to education and Diaspora educational issues, asking for the blessings of His Holiness to the pedagogues and their sacred mission.

The Catholicos Karekin II welcomed and conveyed his Pontifical message to the Armenian teachers from the Diaspora.

Expressing his gratitude for the meeting, His Holiness expressed his appreciation to the teachers for the commitment, through which highlighting their work, every year they come to Armenia for training.

Highlighting the mission of the Armenian school in the national life, the Catholicos of All Armenians painfully noted that today, Armenian education in the Diaspora is on the decline. His Holiness stressed that spirit of nationalism is transferred through the Armenian school, where the Armenian child is created and acquires the knowledge of sacred national values, history, and the prominent Armenians, and the insight that contributes to the strengthening of national identity and consciousness, thereby guaranteeing the further involvement of national life.

His Holiness informed the teachers that during his various pontifical visits he discussed this worrying issue with the Diocesan primates and clergy, stressing the need to have Armenian schools at the side of the churches- to keep the Armenian identity secure. The Catholicos announced that a similar type of training program will be also launched in the Mother See next year, to support the pedagogues operating under the auspices of the national educational institutions in the Diaspora and the Armenian Church.

In his concluding remarks, the Catholicos of All Armenians urged the teachers to actualize the deposits of knowledge transferred from the depths of the centuries, and with a great awareness of their duties, continue their service to the nation. He expressed his wish that the Almighty God blesses, strengthens and makes their efforts more productive.

His Grace Bishop Vardan Navasardyan, Director of the Christian Education Center of Mother See, presented to the teachers the programs implemented by the center in the field of education. Bishop Vardan particularly reflected on the close cooperation between the RA Ministry of Education and Science and the Mother See in the field of general education, as well as the activities of two schools operating under the auspices of the Mother See, a Kindergarten and the Armenian College and Philanthropic Academy of Calcutta. His Grace also spoke about the continuing training of 140 Armenian Sunday School teachers and to support to the ongoing Sunday School programs of the Diaspora Dioceses. Bishop Vardan thoroughly presented the beneficial education and training mission of eight Youth Centers, operated by the Mother See with the support of the AGBU.