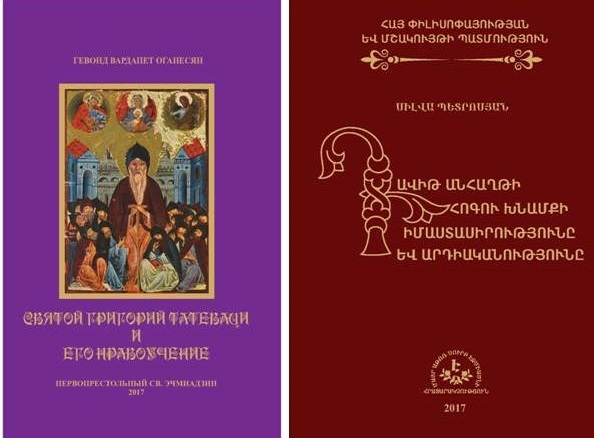 With the blessings of His Holiness Karekin II, Supreme Patriarch and Catholicos of All
Armenians; the Publishing Department of Mother See has published two new boosk. The first is a Russian-language work entitled “St. Grigor of Tatev and his Morality”by Rev. Fr. Ghevond Hovhannisyan, a member of the Brotherhood of St. James in Jerusalem. The second book is a monograph called “Soul Care Philosophy and Modernity of David the Invincible” by Mrs. Silva Petrosyan.

In the “St. Grigor of Tatev and his Morality” book, Father Ghevond introduces the reader the different episodes of the history of the Armenian people, reveals his spirit and essence, as well as through the examination of the works of Saint Grigor of Tatev, Archimandrite of the Armenian Church, represents the Archimandrite’s morality which is also relevant in modern times. In the book he also referred to Christological disputes.

The two books were published through the sponsorship of the Sarkis Gabrellian Fund.